I finished up 63 crumb blocks in a matter of a couple of weeks. I’m pretty surprised I got them done this fast. I was really efficient and productive!

They’re all up on the design wall and now I’m trying to decide how to finish them.

I’m going to do some kind of sashing or borders on each block using Kaffe’s spots in various colors. I originally thought I would use a wider white with black spots sashing with black spots cornerstones, like this:

But I have to admit that I don’t love it. All I see is the white. I thought maybe part of the problem was that the photo was taken late at night, but it didn’t look any better in daylight.

But it still reads too white and the crumb blocks get lost in it. 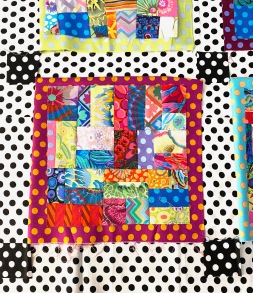 So now I’m thinking I will do just a bunch of different color spots as a border on each crumb block, and will leave out the white and black. I’ll arrange them randomly rather than in a pattern or order.

I like the way this looks, but I have to try out some different widths for the borders to get it right. I also need to buy more colors in the spots. I only have about a half dozen. I’m lucky that there is a store near where I take Rico for our sheep herding lessons that has a really good selection of the spots. I won’t be up there for another week, but will take some blocks with me to select another group of spots.

I have several large cuts of Kaffe fabrics that I bought, mostly on sale, to be used as quilt backs. But none of them really work with this quilt. So on an impulse I went online last night and found the fabric I wanted and ordered enough for the backing, plus enough to leave some for me to fold and fondle.

I have this design in two color ways that would be large enough for backings. But this color is so amazing! And I think it will be perfect for the back of this quilt!

It will be hard to wait a week to get going on finishing up these blocks. I’m going to have to find something else to work on. Maybe I’ll finish the blocks for the Japanese X and + quilt for my guest room. That’s a crazy idea!