Once again I’m taking advantage of my renewed interest in sewing and have started getting all these fun spotty borders put on my 63 crumb blocks. There will be nine different color ways of spots once I’m done.

I cut out all my border strips as I was live streaming my nephew’s wedding Friday afternoon. It was a Catholic mass so there was plenty of time for pressing and cutting! they were married in Wisconsin with about a dozen people in the church… just immediate family, with hundreds watching on the internet.

(This is the couple who received my recent blue and green batik quilt as a gift. they opened it while we were on a Zoom call this morning and the bride loved it! She said the colors are her colors and she LOVED the fish quilting! I told them that the biggest compliment they could give me was to USE it! They promised they would.)

These crumb blocks are squared up to eight inches. The spot borders are cut to 1.5 inches wide. Each block gets two cut to 8 inches and two cut to 10 inches.

I’m chain piecing these borders onto the blocks in sets of seven — all with the same color border so that I don’t accidentally mix the border colors on any given block. That sounds like something I might do! 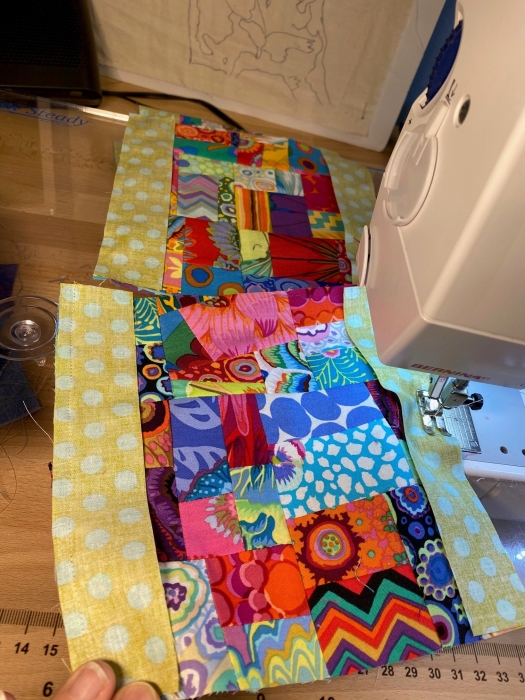 I sew the eight inch pieces onto opposite sides of each block. then press those pieces and add the ten inch pieces to the two other sides. I can whip through a set of these pretty quickly. It’s amazing how each color of spots makes the blocks look completely different. Amazing how this plays with our brains!

I have been using Best Press prior to cutting my strips. This helps me keep the blocks more square and it’s a little harder for me to press wonkiness into the strips once they’re sewn on.

I had done a lot of debating previously about what to do for the sashing for these blocks. After a lot of debate and auditioning a lot of different options, I decided that I would use black and white Jumble with black spots for cornerstones. See a blog post about all this deliberation here.

So I dug into my stash to try some other options and had a friend on the phone while I texted her photos of options. I’m not going to tell you which one I decided on, but I HAVE made a decision and I’m ordering the fabric as we speak! But we were both in total agreement on the one I chose!

I should have a pretty good start on getting the borders on all 63 blocks done this weekend. Then I’m going to finish up my scrappy hexagon quilt top so I can get it off my design wall.