I have really gotten a lot done on this quilt during my four-day weekend. And what a great way to spend a weekend! 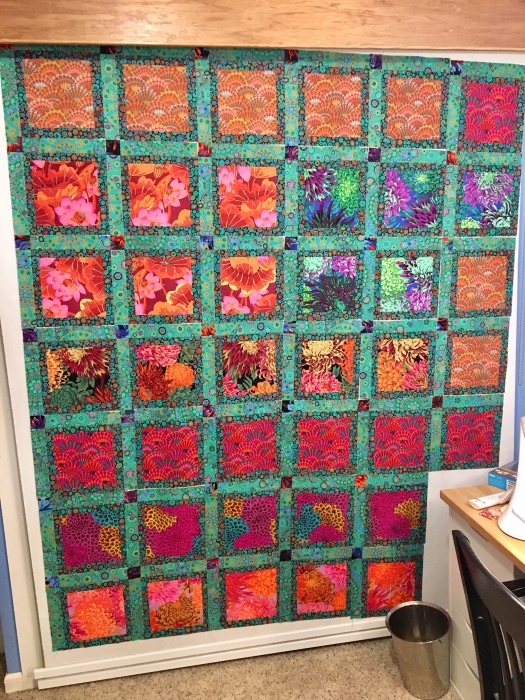 I haven’t arranged the blocks yet. I just put them on the design wall as I finished them because I wanted to see how they looked.

I have about half of the blocks done, and my design wall is full. I’m not really sure yet how big I’m going to make this, but I want it to be generous on my queen bed. I have 89 blocks, which is an odd number and doesn’t add up to a quilt top. But 90 blocks would make a generous quilt once I add the borders.

The pattern instructions said to do one long sashing with cornerstones made from the same jade millefiore fabric, and to sew it to the blocks on one long seam. the purpose of the cornerstones is to help line up each row of blocks.

I figured that if I was going through the effort to make cornerstones, that I should make them special. So I decided to use the same black shaggy fabric as I’m using for the border. And I love how they look.

I also decided to make each block with the green border and cornerstone as part of the block, rather than doing that sashing in one long line. Then on the blocks on the last column and row I’ll need to add the final border of green with the cornerstones. You can see the individual block in this photo. 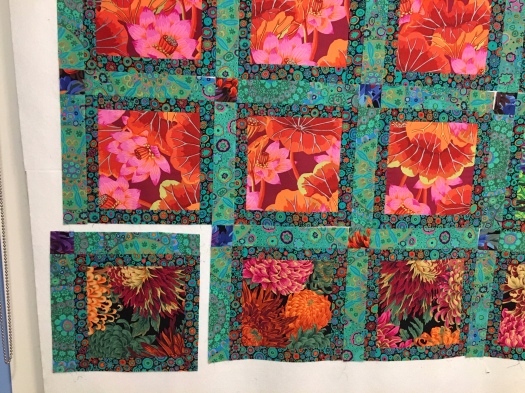 I also used a mass production method to make the 10-inch strips with cornerstones attached. I cut a 9&3/4 inch strip, width of fabric of the green and a 2 inch strip WOF of the black shaggy. I sewed the shaggy onto the green, then put two layers together and cut the finished two-inch strips from the larger piece.

This photo shows two sets of cornerstone strips, one on top of the other, being cut in one piece. It’s a much faster and accurate way to make these strips with cornerstones. 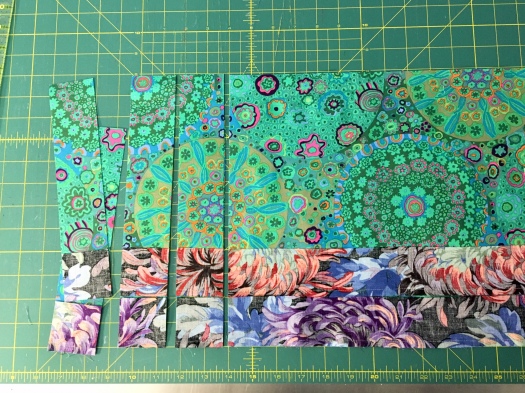 Then I pressed the strips and pinned them onto the blocks to sew. It took a little longer to put these strips with cornerstones onto the blocks. I’m trying to be very accurate so that the finished quilt will go together well and will be flat.

It’s really coming together nicely and I can’t wait to see how it looks once I mix up all the blocks.